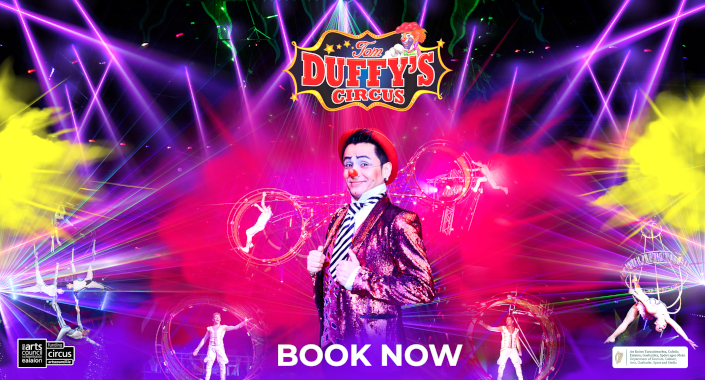 "Absolutely highly recommend. the best circus we have been to" - A.M.

"This is a super show. Non stop entertainment for 2 hours" - A.N.

Ireland's favourite Circus will welcome families & friends of all ages back inside the spectacular Big Top once again, celebrating the first performances since March 2020.

Come along and join us inside our gigantic Big Top for an evening of adrenaline-pumping and action-packed performances. There is no doubt that our star-studded line-up featuring the best performers from Ireland and across the globe will have you clinging to the edge of your seat with your jaw to the floor!

Tom Duffy's renowned goosebump-inducing brothers, crazy clowns, hair raising acrobatics and high-flyers will introduce you to the realm of traditional circus roots with glittering modern twists throughout the show. Be warned! Once you step foot inside Tom Duffy's Big Top, magical memories for you and your family set to last a lifetime are about to be made!

WHERE IT ALL BEGAN: Fun fact! Did you know Duffy's Circus is one of the oldest Circuses in the world, dating back as far as the 18th century!? Duffy's Circus has been wowing audiences throughout Ireland over the past three centuries, visiting county by county each year.

It all began when shoemaker Patrick James Duffy, from County Dublin, became fascinated by foreign circuses visiting Ireland at the time. His love for the travelling circus enticed Patrick to learn various skills, leading him to become a famous acrobat. Patrick's devotion to Circus rippled down through his family roots as his son John later started his own Circus, the John Duffy Circus. John went on to have three sons of his own - John, Tom and James.

Thanks to James, Duffy's Circus continuously flourished and developed into one of Europe's most significant, treasured and loved Circus today. In recognition of this, the Government bestowed Arts Status on Circus, meaning Tom Duffy's Circus is now supported and funded by The Arts Council.